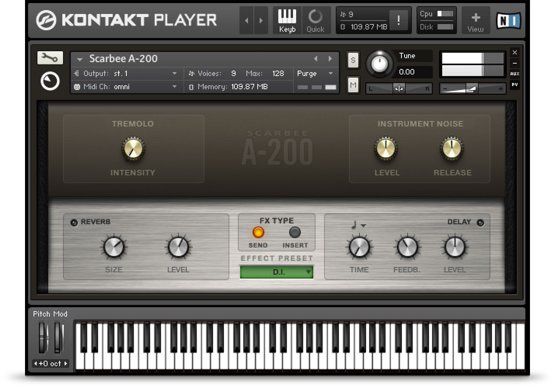 This KONTAKT Instrument delivers an unrivalled reproduction of one of the most sought-after electric pianos. The character of the SCARBEE A-200 ranges from soft and sweet to a more biting, overdriven sound when played harder.

The distinctive sound of the original A-200 was much loved by pop and rock bands in the 1960s and 70s and has recently found favor with a whole new wave of pop, indie and jazz and electronic artists.

SCARBEE PIANOS
Instead of offering a ‘grab bag’ of many instruments which have been sampled to an ‘acceptable’ level,
Thomas Skarbye focuses on a single instrument rendered to a level of detail previously unavailable to
sample users. Through careful study and thorough restoration/setup he aims to capture the “soul” of
the instrument and balances sound, playability and post-editing for a perfect match at the forefront
of sampling technology. The SCARBEE A-200 was derived from Scarbee’s legendary “Edgy Electric Piano”.

GET THE FEELING
The team at Scarbee recorded over 2,000 samples in 24-bit resolution with each of the 64 keys sampled
at 16 different velocities. No extra EQ, tube saturation or compression was used during recording in
order to provide an ultra-realistic sound and feel. With adjustable original instrument noise as well
as the inclusion of Horizontal Release Technology*, this KONTAKT Instrument preserves the spirit of
the original – including its charming flaws and idiosyncrasies. The flexible KONTAKT interface also
contains a built in FX unit to further enhance its versatility and usability, and includes classic
effects such as reverb, chorus, phaser, amp simulation, distortion auto-wah, pan, compression, delay
and tremolo.

*’Horizontal Release Technology’ – release samples are chosen from a wave pool depending on how long a
key has been held – allowing a note played staccato to create a release tone different from a note
which is sustained for a longer period.