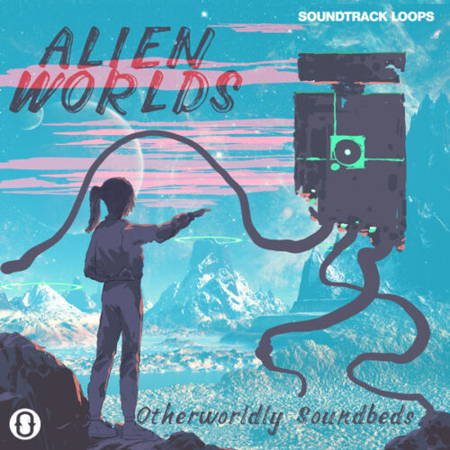 Soundtrack Loops intros Alien Worlds – Retro Sci-Fi Soundscapes and Effects. It goes without saying that the best vintage sci-fi sound effects are made with the best vintage hardware tech and its contemporary boutique inspirations. Here on Alien Worlds: Retro Sci-Fi Effects we have just that, with Soundtrack Loops’ own Jason Donnelly as the controller.

This package of non-looping sound effects comprises 71 files with classic black ‘n’ white sci-fi authenticity: wobbly analog oscillators, rudimentary arpeggios, chattering circuits, and all the classic LFO modulations from pitch to noise. The paleo-ambient vibe is cold and distant, solitary and baffling, bringing to mind Eno’s simple but elusively deep Music for Films-era ruminations, as well as the best of the archetypal dronesmiths, academic electronic music soundscapers, and proto-industrial pioneers of early underground electronic music—bear in mind, these are sound effects created by a musician!

The sounds on Alien Worlds are internalized and understated, favoring the stark, subtle and abstract—the total flip-side of the bombastic modern sci-fi takes found on other Soundtrack Loops titles, such as the Galaxy Gunslinger series (produced by the mighty Belibat). Whether it’s Under the Skin-level strange, or Star Wars-level grand, Soundtrack Loops has you well-covered in the sci-fi sound effects department.

As standard practice for all loops created by the Soundtrack Loops team, Key and BPM are tagged in both metadata and file names.