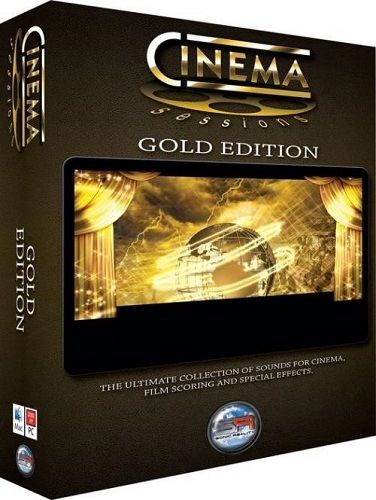 Cinema Sessions Gold Edition is the ultimate tool kit of “Scoring Effects.” It is a discounted bundle of four Cinema Sessions volumes: Symphonic Effects, Global Atmospheres, Dimensional Effects and Ambient Atmospheres. A must-have for any composer or multimedia producer. Instant top quality musical effects from orchestral wild takes to exotic sounds from all over the world to 3-dimensional transition cues and ethereal evolving pads

Expanding on Sonic Reality’s latest “Sounds for Film” and other media category, Cinema Sessions Gold offers unique sonic effects with a musical twist! Whether it is orchestral hits and swells or wild symphonic effects you d hear in a blockbuster movie, three-dimensional WHOOSHES for a car commercial or a transition cue on TV, or the exotic ambience of ancient Aztecs to use in film, music or any media production, Cinema Sessions is the ideal source for any music composer, DJ or media producer.Cinema Sessions Gold includes the following four Cinema Sessions collections.Symphonic Effects contains over 400 orchestral effects for film, tv, games and popular music styles. From sci-fi/suspense/horror hits, drones and intertwining melodies to emotional build-ups this collection offers a wide assortment of hard to find symphonic effects you can use to create the ultimate sound track. Special features include instant forward and reverse playback, time stretch, built-in effects and quick layering capabilities for building an infinite amount of complex new textures. Symphonic Effects offers world-class film score quality effects to use in any style of music or multimedia production royalty free.Global Atmospheres contains over 1350 samples of exotic sounds from all over the world. From tribal Native American drums to Ancient Aztec Ambiance to rare sounds from the Mediterranean, this collection is a must-have for any media producer, sound designer or music composer. Whether you are creating authentic world sound effects for films and video games or wanting to add ethnic sonic flavors to electronic, rock, pop and world music, it delivers a diverse range of rare sonic landscapes, percussion loops, authentic voices and ethnic instrument riffs. Ambient Atmospheres features a combination of film texture pads, drones and ambient soundscapes with ambient sound effects from Sonic Reality. With the type of sound effects you d hear in films and video games to effects used in a musical context such as classic rock albums or ambient electronica, Ambient Atmospheres has a wide range of Thunder Storms, European Train Announcers, Airports, Oceanic Soundscapes, Close Range Fireworks, Birdsong, Dog Barks and futuristic “other world” sound design. Special features include instantforward and reverse playback, time stretch, built-in effects and quick layering capabilities for building an infinite amount of powerful ambient soundscapes. Dimensional Effects features over 340 outstanding special effects and dimensional rhythms for music and multimedia production. Featuring special 3-D sound encoded whooshes, deep booms, big bangs and various electronica effects whiz by with a futuristic sound ideal for modern production. Whether you are creating transition cues for television, radio and other multimedia or wanting to create modern music, cutting edge warped electronica or avant-garde soundscapes, Dimensional Effects adds instant twisted sound design to any production.

Cinema Sessions Gold is a powerful virtual instrument and sound library with sounds that can be used in any style of composition for Film, TV, Video Games, Radio and any genre of music that calls for special effects. The concept behind this powerful series is to provide scoring effects that can be called up and instantly molded like clay into an infinite range of possible sounds designed and performed in real time. Powerful scoring effects can be used to make world-class soundtracks faster than ever before. Whether you need a powerful workstation of every type of effect on hand or you want to use the fast and easy on board manipulation features, built-in DSP effects and layering to create unique sounds where people will wonder how you did it, Cinema Sessions Gold is a must-have for any media producer, music composer or sound designer. Here are more details about the product.

Unpack folder to your library folder. You will need to load the
The Sonic Reality’s Infinite Player in a UNLOCKED version of KONTAKT
from Team R2R
To use this library. Open KONTAKT and use the Add Library option
Then navigate to the Infinite Player Library folder