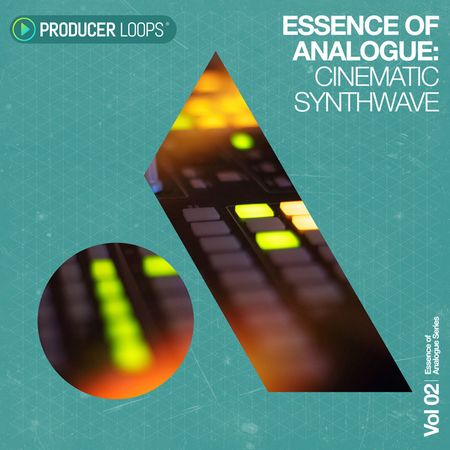 ‘Essence of Analogue Vol 2: Cinematic Synthwave’  is brimming with the retro-futurisitic sounds that add the synthetic, sonic suspense to your favorite 1980s Sci-Fi thriller. A well-crafted combination of vintage synths, arps, and pads, gated and saturated drum machines, and processed rich bass work, this epic collection will give your next Synthwave track the analogue quality it deserves.

This pack is the second instalment in our ‘Essence of Analogue’ series, which was recorded and processed exclusively using analogue synths, drum machines and outboard.

The producer of choice has laid it all on the line in this expertly crafted collection that’s loyal to the essence of Cinematic Synthwave. Everything was recorded and sourced from the analogue domain to keep all of this content as warm, silky and smooth as possible. Nestled inside you’ll find all the analogue induced synths, pads, and percussion loops to be grooving smoothly to some new Synthwave music.

MIDI Files Included:
Like so many other Producer Loops products, ‘Essence of Analogue Vol 2: Cinematic Synthwave’ includes MIDI files for each Kit, allowing you to seamlessly mix your favourite synths and samplers with the sounds contained in the pack.

Advantages of MIDI:
While the supplied ACID/Apple Loops content is extremely flexible and powerful, MIDI has the added benefit of allowing you to go to extremes of pitch and tempo beyond which the loops were originally recorded, with no time stretching or pitch shifting artefacts. Furthermore, you can make tweaks to the riffs so they fit perfectly into your existing mixes.

One-Shot Samples:
Each kit includes a set of drums shots, allowing you to create your own beats, fills and loops to expand the existing material. Simply load them up into your sampler of choice and create an infinite number of new grooves and beats.

Royalty-Free:
All of the loops in this product are 100% Royalty-Free, so once purchased, you can use these loops in your commercial releases without having to pay any hidden costs.