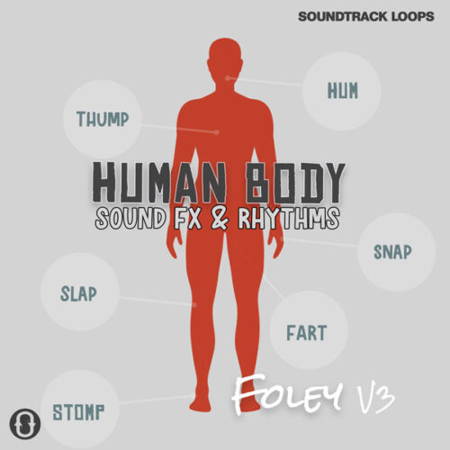 Soundtrack Loops presents Foley V3 – Human Body Sound Effects & Rhythms. As the Foley series expands, it’s becoming obvious that Soundtrack Loops and producer Edgar Lopez are really on to something good. Where else can you get Foley sounds developed specifically with full-fidelity music production in mind? Foley V3: Human Body now joins V1: Kitchen Things and V2: Trash, to form a trio of titles that together deliver an impressively tight ensemble of flexible assets: Foley hits for your post-production timeline, one shots for your sample player, and inspiring beats that groove in unusual and surprising ways.

Human Body contains 52 one shots and 80 loops (95 and 140 BPM). You get body drumming, mouth sounds, scratches, smacks and sniffs, clapping, coughing, and even sneezing, snoring and gagging if you want it! Compared to the first two volumes, the sounds here are smaller and shorter—analogous to traditional hand percussion, hi-hat, and accessory percussion sounds—and a great complement to the dynamic punch of Kitchen Things and the big drum sounds on Trash. Interestingly, as the Foley series expands, so does your capability for building complete and comprehensive drum/percussion kits from the bottom up. Edgar Lopez and Soundtrack Loops bring the tasty ingredients to the kitchen—you make the cake!

As standard practice for all loops created by the Soundtrack Loops team, Key and BPM are tagged in both metadata and file names.