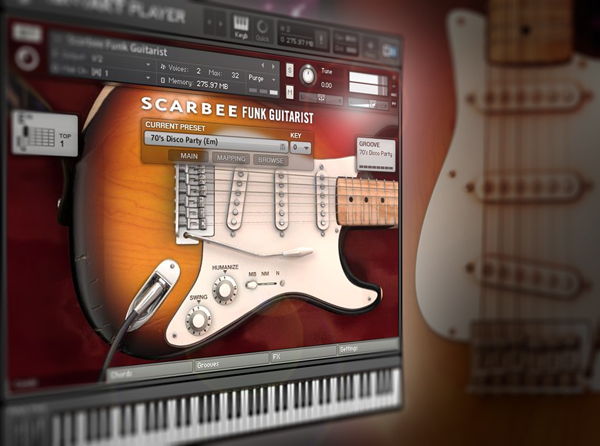 Studio wiz Larry Holcombe presents comprehensive Native Instruments SCARBEE FUNK GUITARIST video tutorials! If funk guitar is your thing, SCARBEE FUNK GUITARIST from Native Instruments is tough to beat. With its massive collection of grooves, fills, and voicings, it’s a tour de force of guitar samples, and this video course will help you quickly produce stellar tracks, as well as dive deep into the more advanced settings. Larry covers all the features thoroughly and demonstrates them in action with two example tracks – disco and soul – so you can really hear the plugin’s capabilities in a musical context. These videos are for new SCARBEE FUNK GUITARIST users.

Larry welcomes you begins by providing an overview of the plugin and its purpose, followed by a tour of the interface so you know your way around. Then, explore the Combi Tab, with which you have access to the Humanize and Swing knobs, as well as the ability to select different pickups for tonal variation. Larry also demonstrates some of the Combi presets and details how to save and load them.

Next, explore the Chord tab and its various parameters, including transposing chord progressions, options for mapping chords in different fret positions, top note, and string groups, and ways you can find alternate chords within the mapping window!

Throughout the rest of the course, you’ll learn to use the remaining features, including the Groove tab (for choosing, creating, and editing your own grooves), Articulation tab (for varying the dynamics and other parameters), the FX tab (8 effects included), and the Settings tab (for adding a play-along reference bass track and more), before observing Larry finish up by creating two example tracks (disco and soul)!