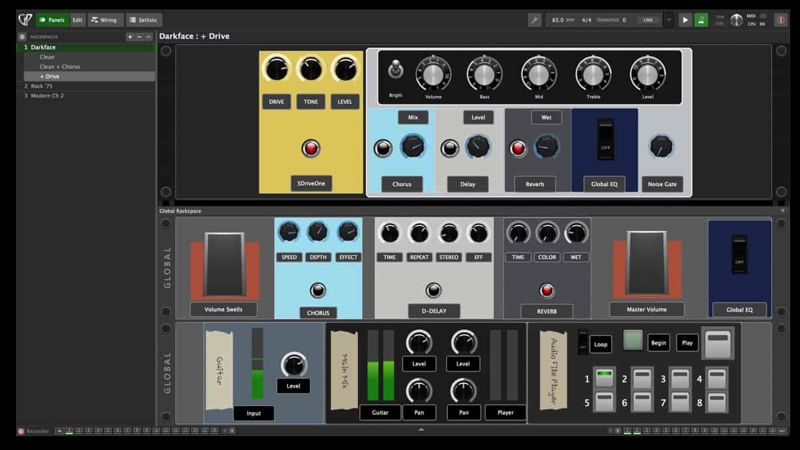 OVERVIEW
This UNLOCKED Version of Gig Performer allows you to use any AU/VST2/VST3 plugins!

Updated with extensive new features
With the Version 4 update, Gig Performer’s user interface gets a facelift, with new widgets, drum pads, a sustain pedal, optimized performance for touch screens, and much more. The new Global rackspace allows you to share your most-used effects globally across all your rackspaces just like you can in your DAW—but even more intuitively. Instead of inserting effects in every rackspace, simply insert them once in the Global Rackspace and all your local rackspaces will have access to them. The new Scaling Curves allow you to control the shape of the output of a widget or convert an incoming note velocity to a new velocity. Other fantastic upgrades include things like an expanded virtual wiring view and a native MIDI File Player.

Made for serious live performers by serious live performers
Whether you’re a guitarist, keyboardist, or even an effects-savvy drummer or vocalist, Gig Performer 4 is your gateway to using your favorite software instruments, amp simulators, and plugins in a live performance setting. Complete with great templates to get you started, sculpt your tone from the included presets, or start from scratch!

The ultimate musical companion for live performance and rehearsals
Gig Performer is the only cross-platform solution for storing your studio sounds and using them as seamlessly for playing live as you do in the studio. With Gig Performer 4, you can build your ideal keyboard and guitar chains with your favorite world-class plugins and take them anywhere.

No more confusing busses, sends, auxes or inserts
Experience a step up from traditional channel-strip approaches. Using the front and back panel views, simply connect plugins to each other any way you want, then custom-design your own Panels to control each Rackspace. You can then design a number of Variations, which allow multiple presets for a single Rackspace, and switch between them instantly from song to song or section to section.

Intuitive routing and rock-solid performance
GP4’s routing screen allows you to easily drop in software objects, from virtual instruments to effects, to MIDI devices and audio interfaces, quickly and easily making connections between them. The Predictive loading feature lets you intelligently load parts of your show, significantly reducing both your RAM and CPU usage so you can perform confidently even with an old laptop.


CHANGELOG
Version 4.0.54 (Aug 09, 2021)
Fixes and Improvements
• Fixed a problem where creating a gig from a setlist did not include the global rackspace nor the gig script.
• Fixed a problem with strange tempo values and the tempo range is 20 to 640 everywhere GP-Beta 987.
• Fixed a problem where locking/unlocking rackspace selection within the setlist view could temporarily prevent a different rackspace from being selected.
• Local widget mapped to global widget now displays global widget text value (if available).
• Fixed problem in ChordPro where transposition wasn’t being applied properly to “root” notes in chord – also fixes spacing issue.
• External API now supports call to enable/disable global playhead.
• External API – no longer gets eroneous call when view didn’t actually change.
• Change the menu item for scripting depending on whether local or global rackspace is active.
• Fixed a problem where MIDI PC messages sent on a channel that’s explicitly not used in GP were not passed to the plugins even if the option was enabled.
• Fixed a problem where the old setlist would still be visible during the load of a new gig file.
• Fixed crash when reloading an INS file.
• Midi File Manager, GPScript: Fixed a problem where end of a track might not be properly detected.
• You can now specify program change through the MIDI Helper dialog when setting a command to switch to specific song parts.
• Fixed a bug where GP could crash in the setlist mode when PC messages come in quickly.