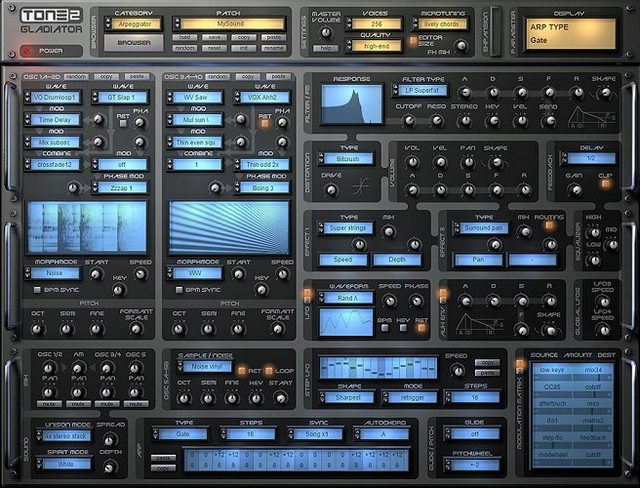 The award-winning Gladiator is a popular synthesizer, which is used for a large number of professional productions. It offers a groundbreaking approach to sound generation. It’s exclusive HCM-synthesis covers a new and unique aural territory.

The update to v3.0 is a major update, which is available for free for all Gladiator2 users. It includes a larger and resizable GUI, a patch browser, enhanced sound quality, a bigger sonic range, a more user-friendly interface and many new features. Gladiator3 is downward compatible. Existing song-projects and patches can be loaded without any further steps necessary. They will benefit from the enhanced sound quality.

Created a new interface, which is nearly twice as large
By clicking on ‘EDITOR SIZE’ you can select from four different interface sizes
Added a comfortable, new patch browser
New sound-quality mode ‘high-end’
18 additional unison modes with a diverse selection of chords
Added context sensitive tooltips with detailed descriptions for all controls
The patches can be ranked by clicking on the stars in the patch browser
The patch rankings are stored within the file “Ranking.rnk”
6 additional lfo waveforms: “Stair 4 up”,”Stair 8 up”,”Stair 4 down”,”Stair 8 down”,”Stair 4 up/down”,”Stair 8 up/down”
Added manuals in English, German, French, Spanish and Italian to the new help menu
New loop mode “Noise”, which jumps to a random section
New loop mode “/50%”, which ping-pong-loops 50% of the spectrum
New loop mode “/25%”, which ping-pong-loops 25% of the spectrum
3 additional phase-modifiers “Zzzap”, which sound like a laser
3 additional phase-modifiers “Boing”, which sound like a reverse laser
2 additional phase-modifiers “Odd noise” and “Even noise”, which noisify the spectrum
2 additional phase-modifiers “Odd 90” and “Even 90”, which sound like a sub-oscillator
Information tags about the patches are shown in the patch browser
Extended halftone-range for the arpeggiator from -23 to +23
Added cross-product-compatibility: Save->’Export…’ exports the sound of osc1 as an Icarus compatible wavetable in wav format
Video tutorials can be shown from the help menu
Updates and additional sounds can be accessed directly from the help menu
176 additional patches

Enhancements for the interface:

Re-rendered the old GUI with sharper texts
The envelope’s attack, decay, and release time is displayed in seconds
Registration screen is now also available in German
Renaming a preset is more straightforward
The version number now can be also shown from within help menu
The updated credits can be shown by clicking on help menu
The parameter info display is able to show longer texts now
Mousewheel support for knobs and list selectors
Double-clicking a knob or slider resets it to the default value
More detailed spectrum display
Manuals on the Mac now can be opened from within the plugin
Better init patch
Enhanced graphics
After loading patch names are derived from the fxp file name
Program name and file name are synced after saving a patch
Added messages boxes with info for some possible errors
Step speed is set to 1/1 BPM after initializing a patch
English manual has been updated
Many smaller enhancements
Patches are now in alphabetical order

Loading and saving banks can now be accessed with a new menu called ‘load’ and ‘save’
Renamed some parameters to be more consistent with the industry standards
The envelope’s fade parameter now works as expected with long attack times
Manuals in PDF format and Gladiatorskin.txt have been moved to Gladiator3_data
On the Mac support files are now stored in /Library/Application Support/Tone2/Gladiator3_data

FIXED : Some sections in previous
release are patched badly. It
does not revert some registers.
As a result, it randomly crashes
when the program reaches that
sections.