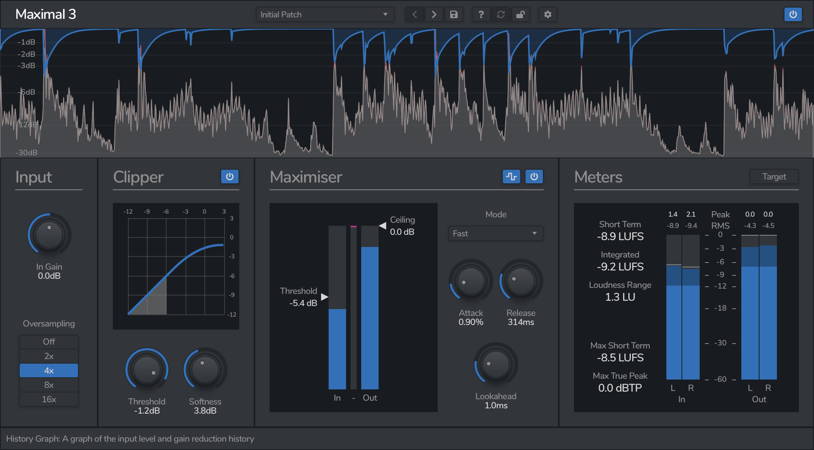 The limiter features true-peak lookahead detection, meaning inter-sample peaks will never overshoot and clip. With four different modes, and controls for attack and release, the shape of the limiter can achieve anything from transparent limiting with transient preservation, to warm bus gluing or pumping.

Maximal 3 features true-peak, lookahead, brickwall limiting. This means that no matter how hard you push it, there will never be any overshoots from intersample peaks.

With four different limiter modes, and attack and release controls, Maximal 3 can be used for anything from clean and transparent loudness maximising, to gluing a bus together.

Clipping can be used to shave off rampant peaks before limiting, or used as a creative tool to add a bit of warmth to tracks.

An adjustable curve from hard to soft allows chopping transients or adding saturation to both individual tracks and whole mixes.

Maximal 3 features a dedicated loudness metering section, displaying the LUFS and true-peak value of the signal, based on the ITU-R BS.1770-4 specification.

Additionally, you can set the target loudness of the meters to any level, such as for mastering specifically the EBU R128 standard.

Using linear-phase resampling filters, our high-quality oversampling algorithm cleanly upsamples the signal before applying the limiting, before cleanly bringing the sample rate back to the original.