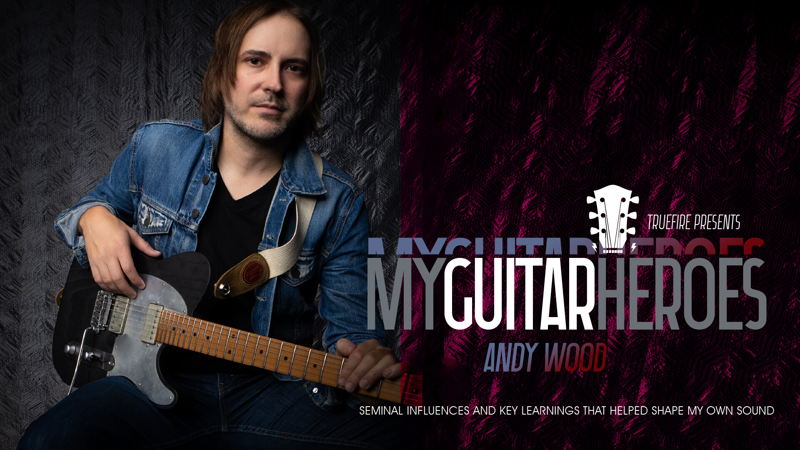 Learn Signature Techniques of Rock & Country Guitar Legends
Every musician has a long list of other musicians, past and present, that have inspired, influenced and helped shape their own sound and musicality. It’s the natural evolution of music. We asked Andy Wood to pass on to you some of the key learnings that his Guitar Heroes passed on to him.

”Brent Mason, Steve Morse, Eric Johnson, Tony Rice, Bela Fleck, and Eddie Van Halen have all greatly influenced my own sound as I’m sure they’ve influenced many other players. In this course, I’ll show you a few of the techniques and approaches that I picked up from each one of them.

We’ll start out with Brent Mason, Nashville telecaster royalty and the guy that inspired me to pick up the electric guitar. There’s Steve Morse, who to me represents the perfect southern blend of fusion, rock, and country.

Eric Johnson – the guy with Texas-size tone and cascading pentatonics. Tony Rice in my opinion the greatest flatpicker of all time and my childhood acoustic guitar hero.

One of my guitar heroes doesn’t even play the guitar but he inspired my guitar playing all the same – modern banjo pioneer Bela Fleck. And in the final study, we’ll look at the greatest rock guitarist of all time, Eddie Van Halen!

As you can see, my influences are all over the place – we’re talkin’ rock legends/guitar hero icons that reinvented the landscape as well as bluegrass and banjo players right alongside them. These guys all make up my musical DNA. Steal a lick or two from this and try to look at the guitar from an angle you maybe wouldn’t have, too! ”

In this course, Andy will first introduce his heroes to you and describe why he found them so influential. After each discussion, Andy will then present a performance study illustrating those influences in a musical context, over a backing track. A breakdown follows every performance and Andy will explain and demonstrate all of the key concepts and approaches in play

You’ll get standard notation and tabs for all of the performance studies. Plus, you’ll be able to use TrueFire’s learning tools to sync the tab and notation to the video lesson. You can also loop or slow down the videos so that you can work with the lessons at your own pace. All of the backing tracks are included to work with on your own as well.

Grab your guitar and let’s dig in with Andy Wood!