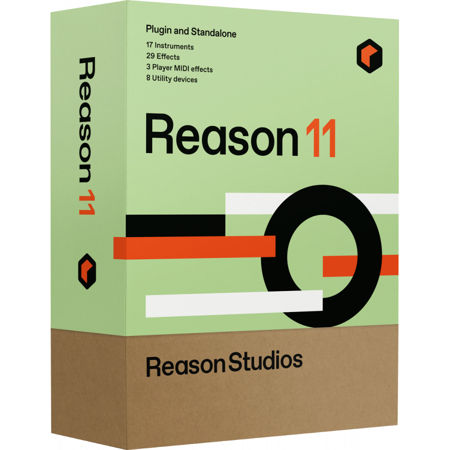 The Reason Studios Reason 11 is the 2019 release of the ever popular Digital Audio Workstation from the former Propellerhead Software. This Audio Creation/Editing program has a powerful processing engine, a host of Instruments and Effects and is presented in 3x versions (Intro, Standard and Suite), making Reason 11 an excellent choice regardless of the user’s needs.

Alongside the stand-alone DAW, Reason 11 can optionally be used as the Reason Rack Plug-In, a VST3 Plug-In format which allows for the use of Reason in other Digital Audio Workstations. This can make the transition to Reason a far more painless process for those familiar with different software.

Reason 11 is the industry standard edition of the lauded software. Included with the package is a generous compliment of Synthesizer sounds, sampled Instruments, Drum Kits, Loops and Effects which empower users to create professional Audio projects in a powerful Virtual Studio. Editing Audio and MIDI automation has received an update, speeding up workflow with a more intuitive response. The rock-solid Recording and Mixing options are retained from previous iterations, now augmented with a series of workflow improvements and new Devices.

* You need the installation of
R2R-WAIFU v1.5 or above.

* To use Rack Extension, check our
Reason Rack Extension Cache Builder
release. More information will be
available in that release.

For the people who want avoid the
Reason 12, which appeared one week
ago. You are better not to install
Reason 11 and Reason 12 on the
same computer.