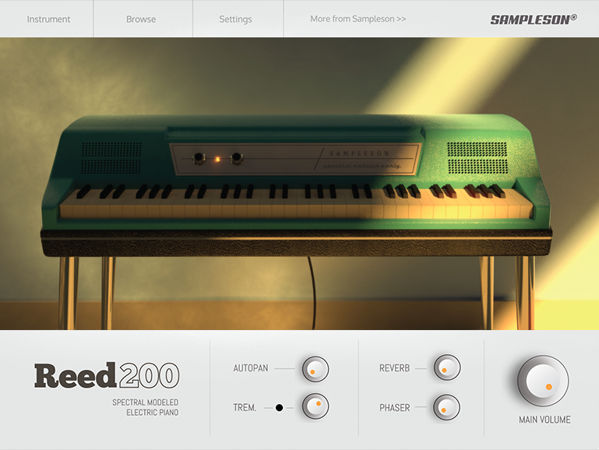 SPECTRAL MODELED REED-BASED EP
Reed200 V2 is clean and responsive, because it’s timbre was made analyzing the real instrument model. Stacking up to 600 sine waves, we achieved a perfect and accurate timbre that reproduces the sound of a Reed-EP on the line output.

The new Version 2 introduces the engine we used on Reed106 with many improvements for realism and CPU eficiency.

WHAT’S NEW IN VERSION 2
Our main modeling engine was rebuilt, and now it allows us to do thing we had in mind for more than a year.
The result is a modeled instrument that is not distinguishable from a real one.

WHAT EXACTLY IS SPECTRAL MODELING?
Every sound in nature can be decomposed into simple sine waves. From a bird tweet to a trumpet note. Spectral modeling is the process of analyzing and creating a sound by stacking simple sine waves.

According to Julius O. Smith (Standford) Spectral modeling provides a sound representation much closer to the perception of sound by the brain because your ear and brain are in fact spectral decoders.