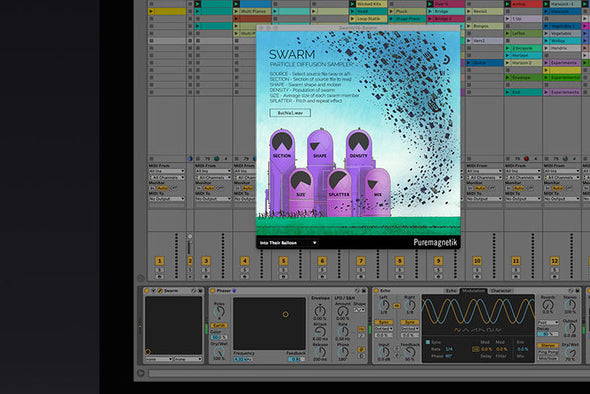 Swarm is a sound design effect inspired by “swarm intelligence” and “particle masses” such as those employed by composer Iannis Xenakis. It clones a segment of a sample and puts those members into a “flock” that disperses in unified – sometimes stochastic – coordination.

Swarm excels in creating dense pizzicato clouds or spacey, randomized ambiences. It is a very unconventional effect with unpredictable and oftentimes wonderous results. With some experimenting, sound designers should become acquainted with the character of Swarm and how it can best be utilized in their productions.

SHAPE ramps up to DENSITY over time – in a loop. Lower values get to DENSITY faster. Higher values take longer to get to maximum density.

DENSITY determines how large the swarm is. It ranges from 2 to 30 members.

SIZE adjusts the average size (duration) of each member of the swarm. It ranges from 100 milliseconds to 1 second.

SPLATTER is a pitch echo effect. It simultaneously controls echo type and pitch parameters. It can be used creatively to get interesting effects from the Swarm.