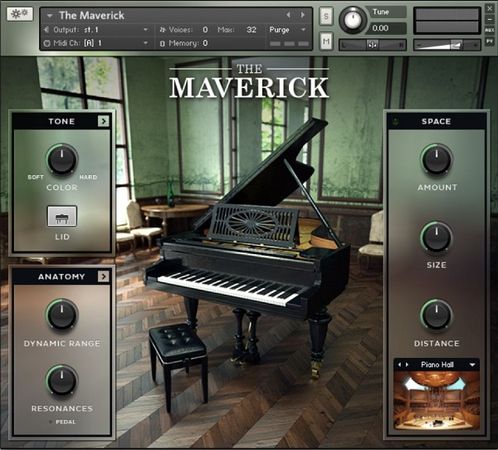 This is a light version of the Native Instruments The Maverick piano library. The instrument is based on a vintage Bechstein Model A Grand Piano. This library has a lovely tone and sounds great in the softer layers. Although not the most versatile library, it still would fare fine in a more upfront context. But its true strength lies in the softer layers. It sounds very intimate and does a great job in Cinematic tracks. If you’re looking for some character, this library would be great choice!

The samples in the original release were in 24-bit 48kHz format. The samples were converted to 16-bit 44.1kHz and repacked into NKX containers. A null test results in a peak of -87dB, which won’t be audible at all. Also, after quite some testing, no issues were found with noise floor build-up when playing lots of notes. The conversion process takes the size down to 1.49GB from the original 4.5GB, which is a 65% reduction!

NOTE: You may need to batch resave the patches and point them to the sample folder location.Kontakt v5.8.0 or higher is required.

Thank you for purchasing THE MAVERICK, a virtual instrument that replicates a vintage Bechstein Model A Grand Piano. Built in 1905 for his Majesty Prince Friedrich Carl von Preussen, this fine grand piano finally was gifted to the Royal Princess of Great Britain. Despite its size of only 1.80m it features a wide range of tone colors from deep and big to bright and clear. As its name reveals, THE MAVERICK features an unconventional sound full of character, with each key having its own individual color. It’s not perfectly balanced, but imperfectly expressive.

Sampled with 18 velocity zones, nine release samples per key and separate resonance and
noise samples it features more than 2500 samples with a size of 14GB.
▪ Based on a vintage Bechstein Model A Grand Piano built in 1905
▪ Over 2500 samples
▪ 18 velocity zones for an extraordinary dynamic range
▪ 9 release samples for each key
▪ Special resonance samples
▪ Halfpedal and Repedal
▪ Color control for easy variation of the timbre
▪ Real overtone samples
▪ Controllable piano noises like pedal, damper, string or hammer noises
▪ Lid Control simulating a virtual lid in three positions
▪ Compressor and Tape Saturation for pop piano sounds
▪ Depth Control for an enhanced resonant character
▪ Transients Control for adding attack or sustain
▪ Based on the Galaxy Pianos engine
▪ 14GB sample content (6.5GB compressed)