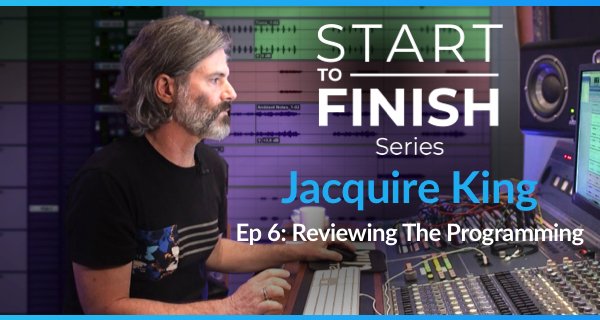 To make the production sound more like a finished record during the tracking process, Jacquire often calls on producers like Spencer Thomson to add programming and additional production to songs. Now that the band’s sounds are dialed in, it’s time to dissect and review the tracks sent from Spencer to see what compliments the band, what might work better with some editing, and what can go to give the band the right energy while they track.

Breaks down every element of the programmed backing tracks
Explains his thought process of creating programming elements with his production partner, Spencer Thomson
Rearranges and repurposes individual parts of the programming
Considers the relationship between the lead synth sounds and the guitar
Discusses when reprinting programming is a better option than using elastic audio
Adds texture to strings and percussion with the SansAmp PSA-1
Reviews his changes with the band
Creates a game plan for the next take with the band
Watch Jacquire King produce “Keep The Light On” from Oak & Ash from Start To Finish only on pureMix.net