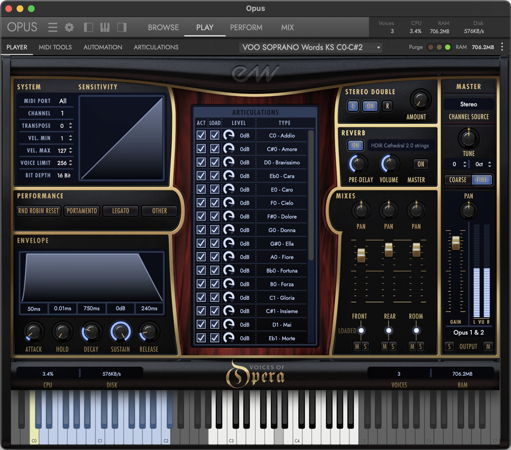 VIRTUOSO SINGERS FOR ANY PRODUCTION
Voices of Opera is a brand new virtual instrument collection featuring the sensational vocals of soprano Larisa Martinez and tenor Carton Moe. Whether classical, romantic or apocalyptic, Voices of Opera contains some of the best performances ever recorded, captured with a collection of warm, detailed vintage microphones. If you’ve been on the hunt for singers that possess enough power to reign over an orchestra, or even complement a soft passage meant to gently stoke an emotional response from listeners, this collection is just what you’re looking for.

Heralded by the New York Times as an “ardent tenor,” Carlton Moe performed as Ubaldo Piangi in Andrew Lloyd Webber’s Phantom of the Opera, the longest running show on Broadway. His opera credits include Lakmé (Gerald), I Capuletti e I Montecchi (Tebaldo), The Mother of Us All (John Adams), Ernest Bloch’s Macbeth (Malcolm), and Roméo et Juliette (Tybalt), and he was a soloist in major works such as Verdi’s Requiem, Beethoven’s 9th Symphony, Mozart’s Requiem, and Handel’s Messiah.

SUSTAIN
10 vocal instruments for held, single-syllable vowels – Ah, Ee, Eh, Oh, Oo. When you want to capture a long note with all its subtle expression, this will likely be your go-to collection in this library.

LEGATO
4 instruments with natural-sounding Ah and Oh true legato intervals up to an octave in either direction when playing connected notes, auto-triggering sustain samples when notes are separated. Perfect for creating lyrical, dramatic passages.

KEYSWITCH
9 instruments combining multiple articulations into a single instrument, using keyswitches to activate the desired choice. When you need flexible performance technique and a lot of real-time control, this will be your collection of choice.

PRISTINE RECORDING TECHNIQUES
Choose and create your own mix from multiple vintage mic positions including Front, Rear, and Room. The Front mic is a Telefunken 251, a famous vocal mic that captures incredible warmth and detail. For the duet phrases, a Neumann U67 was added to fully capture the sound of both singers. The Rear includes a pair of vintage Cole 4038s that add more depth and space. The Room mix includes a Decca tree made up of Neumann M50s and a pair of AKG C12 outriggers, replicating the mic set-up of a classical stage. All recordings were made at EastWest Studios, our world famous recording studios known for producing more Grammy nominations than any other studio in the world: 121 in the last 7 years.

Read the included txt file in the DECiBEL dir for install instructions.