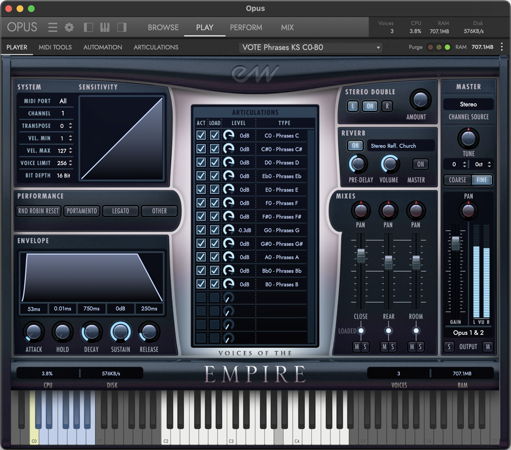 POWERFUL CINEMATIC VOCALS
Haunting, exotic, and mercilessly passionate, Voices of the Empire enables you to craft the perfect vocal performance for your next epic film, TV, or game soundtrack. Featuring the raw, primal vocals of Uyanga Bold, it’s the ideal solo complement to the large-scale Hollywood Choirs library. Her voice will give your music a distinctive quality in virtually any genre, whether hybrid orchestral, industrial, EDM and a wide range of others limited only by how adventurous you are.

EAST MEETS WEST
Uyanga Bold is a unique talent, melding the musical traditions of Bulgaria, Serbia, Mongolia, and beyond. A trained opera singer with perfect pitch, fluent in Russian, Mongolian, French, English, and German, her voice is a true demonstration of East meets West. Her voice is otherworldly, but genuine and world class in its precision. She is featured on the soundtrack of Disney’s upcoming remake of Mulan and recently toured with Hans Zimmer with his live performances of the score from The Dark Knight. Forbes says “her voice harkens back to ancient civilizations,” and she has been nominated as “Female Singer of the Year.” She has appeared internationally on television, radio, and in live performances, reaching over 25 million views across all platforms.

SUSTAIN
A wide variety of vocal instruments, including Melismas, Slurs, Sustain Vibratos, Non Vibratos and Up Downs. If you want flare and earthiness but don’t need many connected notes, Sustain is your best option.

LEGATO
In addition to providing true legato for every interval up to an octave, Uyanga’s performances are recorded in two distinctly different styles: traditional and Mongolian. When you need a fluid performance that comes as close to live as possible, this will likely be your go-to collection in this library.

COMBO
These instruments combine multiple articulations into a single instrument that uses the Mod Wheel (CC1) or Velocity Sensitivity to determine which of the different articulations will playback. This collection is the best choice for real time flexibility while playing, due to the simplicity and speed with which you can make performance adjustments.

PHRASES
Instruments containing a total of 254 phrases sung in western and non-western styles (roughly 21 phrases for each of the 12 root notes). These improvised recordings gave Uyanga the chance to let loose, so while they don’t always stay in key, they more than make up for it in passion and spontaneity.

KEYSWITCH
Combinations of Legatos, Melismas, Phrases, Sustains and Words into single instruments controlled via MIDI keys. When precision and variation are important and you’re happy to make some surgical adjustments, this collection offers a lot of flexibility.

PRISTINE RECORDING TECHNIQUES
You can easily adjust the volume and pan of Close (Josephson 257 & Neumann U47), Rear (pair of Coles 40-38s) and Room (AKG C24) mics, giving you control over the tone color and stereo image. Layer them for a fuller, richer sound, or select the one whose quality you enjoy the most. All recordings were made at EastWest Studios, our world-famous recording studios known for producing more Grammy nominations than any other studio in the world: 121 in the last 7 years.

Read the included txt file in the DECiBEL dir for install instructions.