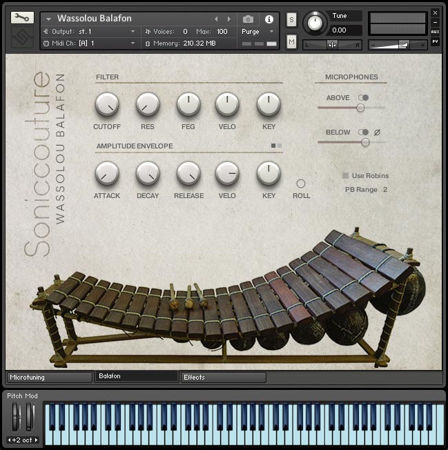 AFRICAN BALAFON WITH SNARES
French musician Jean-Philippe Rykiel contacted us about a unique type of African balafon in which each key had “snares” that vibrated when played, giving it a interesting buzzing quality.

Sometimes called a “gyil”(JEE-le), it’s usually found in parts of northern Ghana, Burkina Faso, and south-eastern Mali. Hardwood keys are suspended over calabash gourds. Silk or paper covers small holes in the gourds which resonates to produce the characteristic buzzing.

Rykiel has long been involved with West African musicians, having collaborated with both the wonderful Salif Keita and Youssou N’Dour. For the balafon however, he knew of a virtuoso player from Burkina Faso named Mamadou Diabate now living in Austria. He enlisted Mamadou to play the instrument for a recording session that he would conduct himself.

The recordings then made their way to us, and the result is the instrument you find here. We hope you’ll find this instrument both curious and inspirational!

KONTAKT PLAYER COMPATIBLE
This is a Kontakt Player instrument. This means that you do not need to own the full version of NI Kontakt to use it. It will run as a plug-in instrument in any VST/AU/RTAS/AAX/WASAPI,compatible host program or DAW eg: Cubase, Logic, Ableton Live, DP, Reaper, Pro-Tools. No extra purchase necessary.